Israelite farmers and ranchers were the only ones given instructions in the Old Covenant that they must give 10%. Following are two examples: Deuteronomy chapter 14 verse 22 and Leviticus chapter 27 verse 30.

In a nutshell, the were three tithes from some of the Israelites and a 4th from the Levites to the Levite priests.

All tithes were always food and NEVER money and yes, they did have money and silver back then. Everybody did not raise crops for a living. 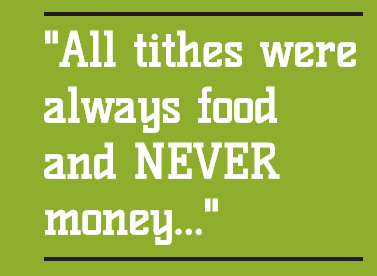 Tithing advocates often attempt to elevate tithing by calling it a principle but it clearly is not. It was not something required of all Israelites and even if it did, that alone would not make it some timeless never-changing practice that all believers in Jesus Christ would need to continue to practice. As detailed and complicated as some of the laws were, Jesus Christ clarified the most important parts of the Law in Matthew 22:36-40. In addition, there are prophecies concerning many things especially concerning the birth, death, and resurrection of Jesus Christ. It is fulfilled prophecy for one thing, that sets the Bible apart from every other teaching on gods. It is beyond the scope of this instruction to explain all the wonderful teachings in the Old Testament.

It is the Old Covenant Laws that were given to the Israelites that is the issue. No Christians that I am aware of are taught to perform animal sacrifice today. I believe Bible teachers are correct in not teaching animal sacrifice. However, the Israelites were directed to do that in the Old Covenant. Examples can be found at Leviticus chapter 3 verses 1-5 and Leviticus chapter 4 verses 1-12.

All the laws God gave to the Israelites were important for their survival. I have only given examples of some of the harshest ones. Deuteronomy chapter 11 verses 13 through 15 is one example of what God promised to do for the Israelites if they obeyed his laws. God promised many other blessings for their obedience as well as curses for their disobedience. 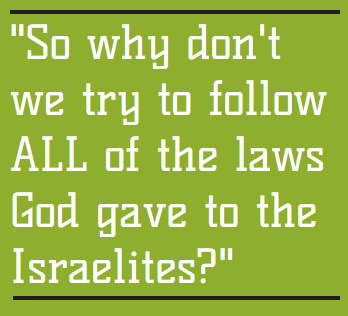 So why don’t we try to follow ALL of the laws God gave to the Israelites? Is that something we should be doing? Absolutely not! There are plenty of scriptures in the New Testament that explain very clearly about this. (Rom 6:14-15, Rom 10:4, Gal 2:16, Gal 3:10 -13, Col 2:13 -14) Some try to separate the ‘nice’ ones from the ones that are not so nice and just try to obey the ‘nice’ ones like the laws concerning tithing. That is not correct.

Here’s an excellent example of the point I am making – Deuteronomy chapter 12 verses 4 through 7 instructs the Israelites that they are to bring their tithes and their burnt offerings to the Lord. It seems that some are willing still to obey part of that sentence about giving a tithe but not the part about burnt offerings. Something is wrong with that. Either we obey all of the laws God gave to the Israelites or none of the laws God gave to the Israelites. It is not a menu that we just get to pick out the ones we want to obey.

There are a whole host of things we would have to start doing differently if we really wanted to start obeying the laws God gave to the Israelites. Read some of them for yourself and you’ll see what I mean. The biggest problem is that the birth, death, and resurrection of Jesus Christ would have no benefit for you since you would still be trying to obey the laws that all point to Jesus Christ as the fulfillment of the law and the prophets. (Matthew chapter 5 verse 17).