In the section titled “Robbing God” I stated that tithing was not God’s ‘best’. What I mean is that tithing was not God’s choice when it came time for the important task of building first the tabernacle and later the temple. Tithing was started as the way for the Levite tribe to have income as they maintained the tabernacle (also for strangers, widows and orphans) and later the temple and serviced it since they were only given towns to live in. The Israelites failed God often and their willingness to tithe changed just as often.

So what does the Bible teach is God’s best as far as giving money is concerned? Freewill offerings are what I maintain is God’s best way of having his people give, not tithing. This is demonstrated on at least two very significant occasions in the Old Testament and is the only way demonstrated for giving in the New Testament. 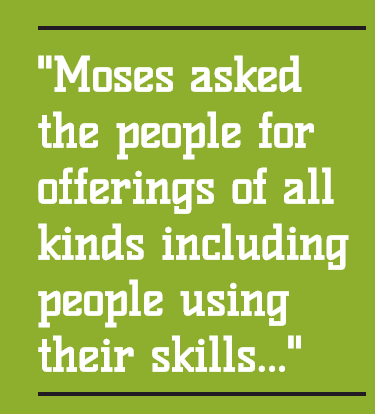 The first example of freewill offerings I want to point out is demonstrated in Exodus 35 and 36:1-7. Moses asked the people for offerings of all kinds including people using their skills to help build the tabernacle, make the decorations, weave the material, and set the precious stones that were donated. The people gave and gave and gave. They gave so much that Moses had to ask them to stop giving because the craftsmen had more than enough to finish the job! The people were giving cheerfully!

The other incident I want to mention has to do with preparations for building the temple. The temple was to be the most important building in all Israel yet God did not count on tithes to build it. King David was gathering building materials and gifts so his son Solomon could get started building the temple. First, King David contributed, 2 Chronicles 29:2-5. Then he invited others to give 1 Chronicles 29:6-9 and the people gave willingly and rejoiced at the willing response of their leaders. King David and the people were not giving tithes. They gave freely and wholeheartedly. Like the first incident I mentioned, the people gave cheerfully. The fact that they gave cheerfully is important. In the New Testament, 2 Corinthians 9:7, we are directed to give cheerfully too. As I study tithing and compare it to giving freely, the cheerfulness comes with giving freely. Freewill giving is the way God wants Christians to give now.