Robbing God! (Malachi Chapter 3 verses 8 -11) To me, this was the most intimidating scripture about tithing in the whole Bible. I had my doubts in the early 1980’s about whether to ‘tithe‘ or not but when my pastor quoted those scriptures I immediately started ‘tithing‘. It wasn’t ‘tithing‘ for the right reasons but God blessed me anyway. I had sat down before I started ‘tithing‘ to try to determine how much I could give to the church. I determined there was no way that I could afford to give 10% of my income – or so I thought. After having Malachi explained to me I started ‘tithing‘ not out of respect for God but rather because I was afraid God was going to destroy all my stuff.

I made the same mistake I believe a lot of people make and that is to think that it is our faithful ‘tithing‘ that brings us his blessings. It is our faith in him that brings some of his blessings. Some we get just because we are alive. The Bible teaches that the rain falls and the sun rises on the good and the bad so there is a certain amount of blessings everybody gets no matter if they ‘tithe‘ or not. (Matt 5:44-45)

Just like the other scriptures that provided the law for the Israelites, the writers include a phrase or sentence indicating to whom they are speaking. The same is true about the scripture in Malachi. The command about tithing and the blessings too were not directed to New Covenant believers! Let’s go back to Malachi chapter 3 starting at verse 6 and read carefully. “…. descendants of Jacob,….. Ever since the time of your forefathers you have turned away from my decrees”. That tells that God is talking to the descendants of Jacob. New Covenant Christians are descendants of Jacob in a spiritual sense but God through Malachi was speaking in a literal sense meaning he was speaking to the people right there at the time not many many generations later. Verse 9 continues in the same thought “You are under a curse – the whole nation of you….” New Covenant Christians are not a nation in the same sense. New Covenant Christians are referred to in 1 Peter 2:9 as a “…holy nation…” which people become a part of by rebirth (by being born again) and not by natural birth. 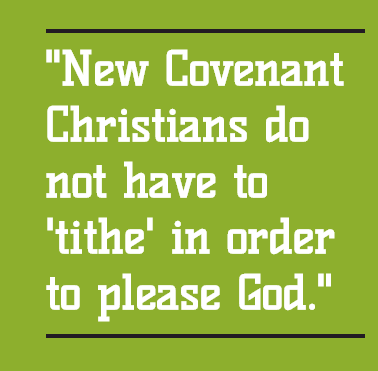 New Covenant Christians do not have to ‘tithe’ in order to please God. For those of you that still have some questions about this passage then read on. Here’s more evidence of what I have already stated that God is not directing any of the laws he originally gave to the Israelites to New Covenant Christians.

He wasn’t talking to you.

God through his prophets told of a time when people who were not Israelites (Gentiles, meaning the rest of us) would be given the (gospel) good news also. We were to receive a better covenant than what he had for the Israelites. We were not to be bound by the law. Galatians chapter 3 verse 13 tells us we have been redeemed from the law. We’ve been given freedoms that the Israelites did not have. For example, each one of us can have a relationship with God ourselves without going through a priest as the Israelites had to do under the Old Covenant. The average Israelite person did not have the freedom to have a relationship with God themselves. God was only active in the lives of prophets, priests, judges, and some kings. In addition there were a few special occasions where God would be with someone like Gideon (Judg 6).

In verse 10, God talks about opening the windows of heaven. In order to open the windows of heaven they first have to be closed! That is not the situation that New Covenant believers find ourselves in now. Ephesians Chapter 1 verse 3 says, “Praise be to the God and Father of our Lord Jesus Christ, who has blessed us in the heavenly realms with every spiritual blessing in Christ.” Many Christians either don’t realize what this means or don’t know how to have more blessings of God in their life; that’s a separate problem. The point I want to make is that the windows of heaven are not closed to New Covenant believers. A similar verse is found in 2 Peter.

2 Peter 1:3-4
“3 His divine power has given us everything we need for life and godliness through our knowledge of him who called us by his own glory and goodness. 4 Through these he has given us his very great and precious promises, so that through them you may participate in the divine nature and escape the corruption in the world caused by evil desires.” NIV

Participating in God’s ‘divine nature’ is NOT dependent on a person’s ‘tithe’! God is NOT sitting around waiting for Christians to ‘tithe’ before blessing them.

We should be generous with the poor but we are not robbing God if we do not tithe. You sin if you are selfish towards those truly in need.